Nelson-based professional Ryan Chisnall has built himself a three-shot lead heading into the weekend at the DVS Pegasus Open on the Jennian Homes Charles Tour.

Chisnall backed up his stellar opening round of 66 with a five-under par 67 to be 11-under through the opening two rounds.

He says despite not having the game he showed up with yesterday, he’s happy with the result.

“I’m pretty happy. If you had told me at the start of the day that I was going to shoot 67 I definitely would have taken it.

“I got a little bit lucky out there and didn’t play quite as well as yesterday so I’m very happy with the score,” he explains.

Chisnall began the day on the first making par followed by a bogey at the long par 3 second.

The tide would turn at the par 5 fifth where he made eagle and backed that up with a birdie at the very next hole. Three more pars to close and he made the turn at two-under par.

Chisnall would pick up three more shots at the 13th, 15th, and 18th holes to lead by three heading into the weekend.

He says his new moustache seems to be working.

“I’ve never had the mo at one of these events before and it seems to be working so far! We’ll see if it behaves itself heading into the weekend,” he jokes.

“It’s a position I’ve been in a few times before so it’s nice to be up in the mix once again. I’m just looking forward to getting underway again tomorrow.

“It’d be nice to taste victory on the Jennian Homes Charles Tour at the end of the weekend, that’s for sure,” he says.

Chisnall will need to hold off two-time winner on the Jennian Homes Charles Tour and tied overnight leader Daniel Hillier.

Hillier is nipping at his heels just three shots back following rounds of 66 and 70 to finish at eight-under par.

Like Chisnall, Hillier also started the day on the first and made birdies at the second and seventh to make the turn at two-under and tied up the top of leaderboard.

Hillier made a bogey at the 11th but recoverd with birdies at the 14th and 16th holes.

Despite finishing with a bogey, Hillier is excited for the weekend and the prospect of joining an elite club of those with three Jennian Homes Charles Tour titles to their name.

“It’d be really special. I’ve been in this position before and I’m excited for weekend.

“I didn’t strike the ball as well as I did yesterday, but I scrambled really well to save pars. Hopefully I can continue that tomorrow and Sunday,” he says.

Hillier will tee it up alongside good friend Chisnall for moving day tomorrow, which is something he’s looking forward to.

“I’m looking forward to playing with Chizzy tomorrow. We’re really good mates and I’ll make sure I bring a competitive edge that will be good for the both of us. There is still a long way to go but it’s a great position to be in.”

Three players are a further shot back at seven-under.

Play gets underway tomorrow from 7.45am. 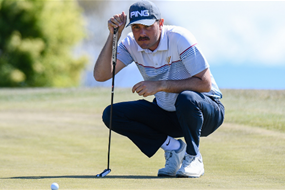 Nelson-based professional Ryan Chisnall has built himself a three-shot lead heading into the weekend at the DVS Pegasus Open on the Jennian Homes Charles Tour.