It’s one down, five to go for New Zealand’s Daniel Hillier after he continued his imposing form at the prestigious US Amateur Championship. The world No 27 and New Zealand’s top-ranked amateur won his round of 64 match 3 and 2 against American Jacob Bergeron at Pebble Beach on Thursday (NZT), after he qualified as top seed in a massive field of 312 golfers.

Wellington’s Hillier, who turned 20 last month, faces two matches on Friday (NZT), starting with American world No 24 Davis Riley in the round of 32 teeing off at 3am NZT.

He needs five more wins in a gruelling, high pressure week to emulate compatriot Danny Lee’s title in 2008 and book direct entry into all four major tournaments next year.

The final 64 contained leading amateurs from 13 different nations, including four of the world’s five highest ranked, in the tournament won in three successive years by Tiger Woods in 1994, ’95 and ’96.

To show how cut-throat it was, the top-three world rankings in the field all bowed out in the round of 64: Americans Braden Thornberry, Justin Suh and Collin Morikawa. World No 1 Thornberry was rolled 2 and 1 by Argentina’s Jesus Montenegro, world ranking 998th.

After topping the 36-hole strokeplay qualifying with a six-under total at the famed links course on the California coast, Hillier had an early hiccup in his opening match. He was two down after three holes against Bergeron, before a par and birdie on the fourth and fifth holes quickly drew him back to all square.

“I’d be lying if I said no [I wasn’t feeling the pressure early on]. Coming into the match play as the No 1 seed, there’s always that little bit of expectation lurking around,” Hillier said.

“But yeah, after the slow start, I managed to put a good roll on a putt on the par-three, the fifth hole, and that calmed the nerves, and let me get into a bit of a rhythm, which was nice.”

The pair halved the next six holes before Hillier made his move, going two-up with five to play after pars on 12 and 13 as his rival slipped up.
A Hillier birdie on the 360m par-four 15th sealed the deal and they shook hands on the 16th green.

The highlight for Hillier was his birdie on five with a long putt. “I’d say it was 40 to 50 feet. I missed a couple of real short ones early on, so the confidence levels weren’t too high, but then draining that one I managed to get back into my routine, and yeah, everything just fell into place from there.”

Bergeron, from Slidell, Louisiana, was ranked 20 spots below Hillier at 47 in the world and made the match play cut in a remarkable 24-way playoff earlier in the day.

Tied with 23 others on four-over after the stroke play, Bergeron and company returned at 7.30am local time to find the 64th and final qualifier. He birdied the par-three 17th along with one other player, which knocked out the other 22, then bogey on 18 was enough for him to progress to face top seeded Hillier. 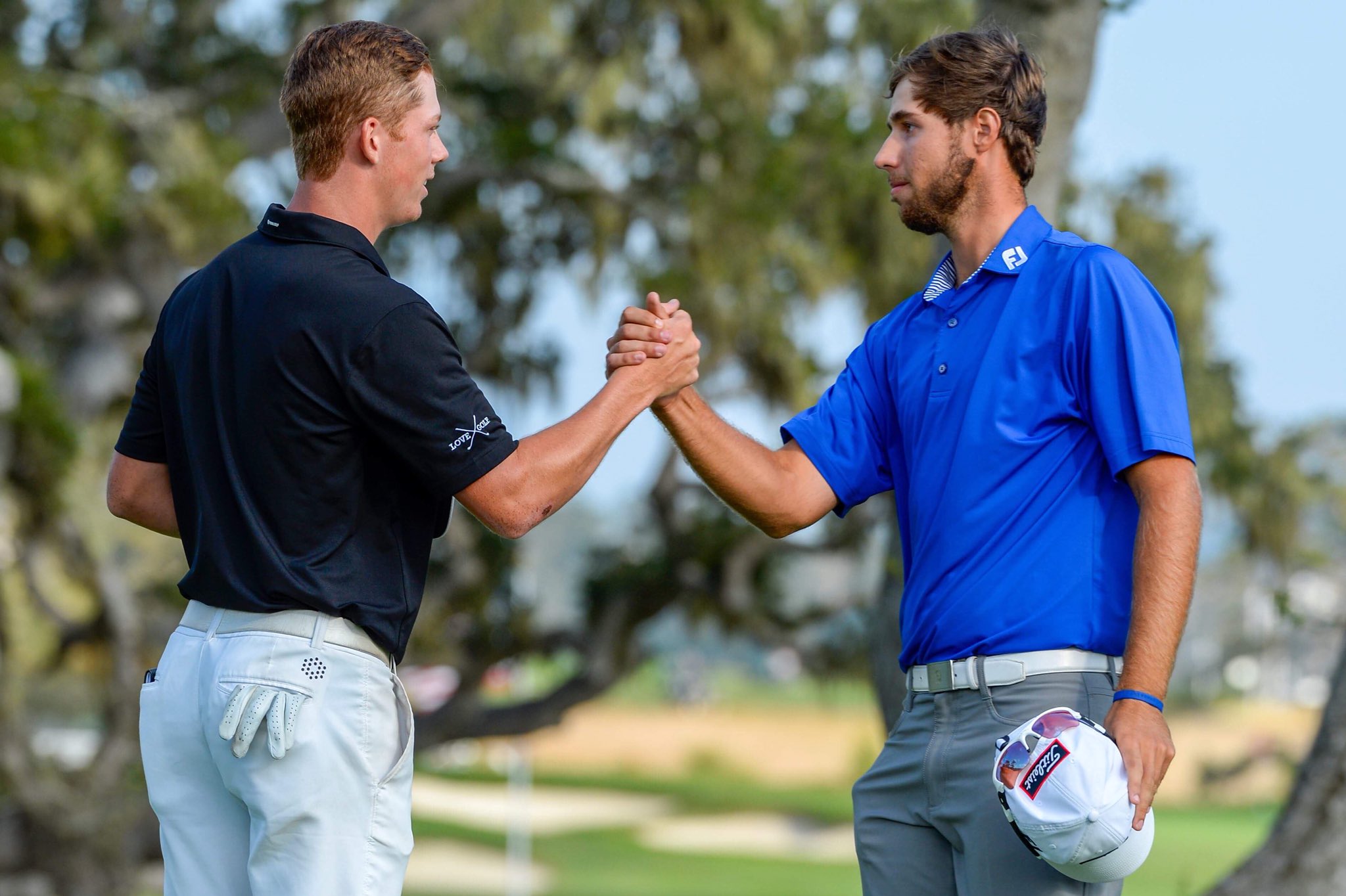 New Zealand’s Daniel Hillier moves into round #2 of the match play at the U. S.  Amateur, Pebble Beach.