The Espirito Santo Trophy has come to an end with the New Zealand team of Wenyung Keh, Julianne Alvarez and Amelia Garvey finishing 19th at the World Amateur Team Championships, while the men prepare to start their Eisenhower Trophy campaign this Wednesday.

Canterbury’s Amelia Garvey continued her impressive form to record a round of two-under par to be the most consistent of the week in Ireland with rounds of 76, 70, 72 and 71 (par 73).

Keh and Alvarez were not far behind Garvey on the final day with rounds of 74 and 76 to finish nine and ten over par for the tournament respectively.

The USA have dominated to claim the main prize and finish 10 shots clear of Japan in second place and engrave their name on the Espirito Santo Trophy for the 14th time and for the first time in 20 years.

Current New Zealand Age Group Champion, Ayean Cho of Korea has gone on to wow the world and win the individual standings by two shots. Over four rounds she completed the week in an impressive 17-under par total and guide her Korean team into third place overall.

The Eisenhower Trophy will now take centre stage at Carton House Golf Club as Daniel Hillier, Denzel Ieremia and Kerry Mountcastle look to repeat the history of the 1992 team that claimed a famous victory at the World Amateur Team Championships.

New Zealand’s leading male amateur Hillier will spearhead the team with his ranking now lifting to 26th in the World Amateur Golf Rankings (WAGR) after continued success on the world stage.

The Wellingtonian is coming off a superb performance at the US Amateur Championship where he finished lead amateur after the qualifying stages before making it through to the round of 32.

Joining Hillier in the three-man team will be U.S based Denzel Ieremia and fellow Wellingtonian, Kerry Mountcastle.

Mountcastle closed off the New Zealand domestic season in fine style with victories in the New Zealand Stroke Play Championship at Paraparaumu Beach before beating the professionals at the Carrus Open for his maiden title on the Jennian Homes Charles Tour.

Ieremia has played his way into the team while completing his degree at Iowa State University. He will bring three years of international experience plus many standout performances for his college team to Carton House, Ireland.

The New Zealanders will have a morning tee time to start the week with Ieremia getting things underway at 7:51pm NZT. The same rules apply in the men’s championship with the best two of three scores counting towards the team total. 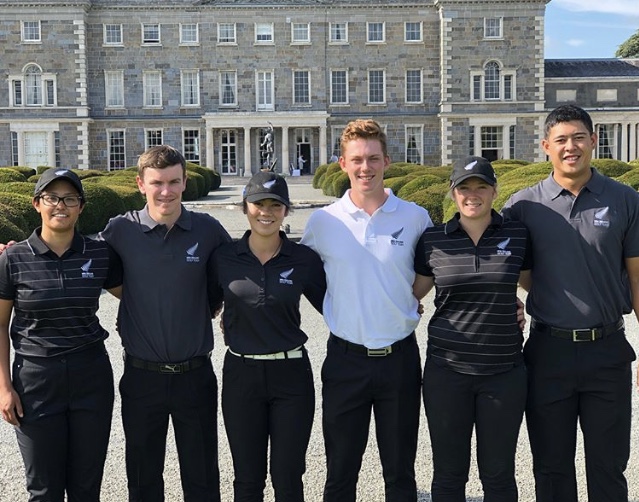