Fox and Hillier in front at Autex Muriwai Open

Fox and Hillier in front at Autex Muriwai Open

Ryan Fox has joined Daniel Hillier at the top of the leaderboard at the midway point of the Autex Muriwai Open on the Jennian Homes Charles Tour.

Fox has fired a second round of 66 after his opening round of 65 to get to 13-under for the tournament and tie overnight leader Hillier.

The European Tour player began his day with a par on the first and quickly got into his work with a birdie at the second. The trend of making a birdie every second hole continued for the front nine as he picked up shots on the fourth, sixth, and eighth holes and made the turn at four-under par.

He began the back nine with a birdie at the 10th before the speed wobbles hit midway through the back.

Fox made bogey on the 13th and 15th holes but made birdies on the 14th and an eagle on the 16th to get his round back on track.

He says it was a solid day at the office.

“It was a solid day out there today. I holed a couple of putts and it looked like I was going to get it going after about 10 holes but had a couple of scrappy holes on the back nine, but I made a nice eagle on the 16th to rectify that.

“I’m where I want to be after two rounds, and we’ll see how I go in that bad weather tomorrow,” he explains.

The European Tour winner is excited of the prospect of going back-to-back on the Jennian Homes Charles Tour.

“That would be really cool. I haven’t played an event in six or seven years, so it was nice to get another win on the board last week and I’d certainly like to go back-to-back.

He’ll be paired with Hillier again tomorrow after Hillier backed up his opening round of 64 with a round of 67 today to get to 13-under for the tournament.

Hillier had a blemish free round today and made birdies at the second and fourth holes and would make the turn at two-under par.

He made further birdies at the 11th, 15th, and 17th holes and signed for a second round of five-under.

Hillier says he’s excited at the challenge of going against a European Tour winner over the weekend. 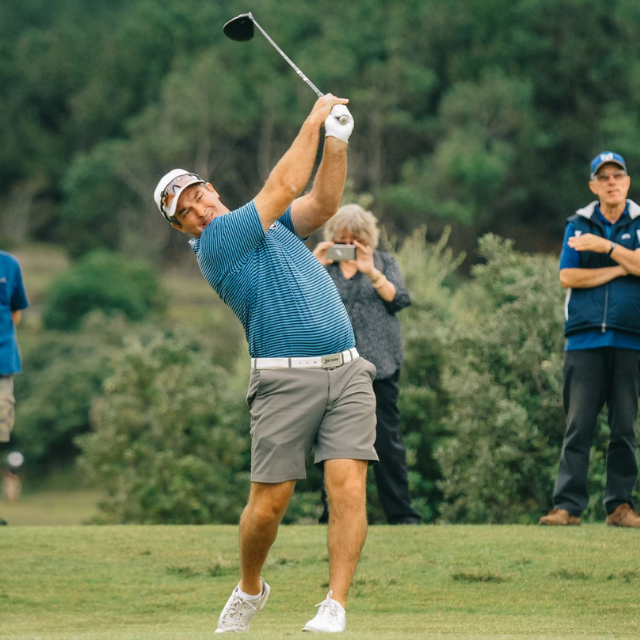 Ryan Fox has joined Daniel Hillier at the top of the leaderboard at the midway point of the Autex Muriwai Open on the Jennian Homes Charles Tour.