Josh Geary has showed why he is one of the country’s best today by extending his lead at the Barfoot & Thompson Akarana Open with a clinical round of six-under par 64 in Auckland today.

He barely got out of first gear as he backed up his day one total of 63 with another bogey-free card which included three birdies in a row to kick-start his back nine and hold a three-shot lead over James Anstiss.

The 34-year-old who finished tied second at the recent 100th New Zealand Open continues to ride his momentum onto the Jennian Homes Charles Tour and is excited for the weekend to come.

“I hit it nice again today which was pleasing and putted a bit better even though a few didn’t go in but it puts me in good stead for the weekend,” said Geary.

If things continue this way, the 2014 Akarana Open champion will be hard to stop having left some golden opportunities out there again this morning.

“It’s a good sign the fact there are still a few more shots left out there which means I’m playing well, so hopefully they come in the weekend. This is a course where you need to keep the foot down, so I will be aiming for plenty more birdies over the weekend.”

After an early double-bogey from Anstiss who is aiming for two victories in-a-row, he showed class to patiently fight back with seven birdies to sit outright second.

Pearce who searches for his fourth Jennian Homes Charles Tour title joined the eagle club today with a perfect ‘soft sandwedge’ from 99 metres on the seventh hole to take his round to five-under early on.

He would end the day equalling Geary’s total of six-under to be in third and take his place in the familiar final group for moving day tomorrow.

Playing alongside Geary and making a move of his own was the country’s leading amateur Daniel Hillier who matched the leaders round of six-under par to leap into a tie for second.

His round was highlighted by an exciting charge through the middle stages by making a birdie on 17 before driving the par four 18th to make a perfect eagle in front of local galleries. He then backed that up with a birdie on the first to show Geary he can keep up with him.

Sitting in fourth is a crowd favourite with Akarana’s very own Joshua Bai recording a round of five-under par to leap into contention at the remarkable age of just 12-years-old. He finished with a bang by holing out on the 18th hole for an eagle two in front of all the locals.

Bai will play alongside 2016 New Zealand Open champion Mike Hendry two years after Bai enjoyed a ‘fan photo’ with the champion here at this same tournament.

Bai has been growing in maturing and confidence at this level and with junior golf victories all around the world, it’s great to see him sit at a tournament total of seven-under par and playing in the penultimate group.

The third round will tee off at 8:30am with some mouth-watering match ups in the final groupings. 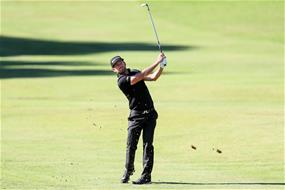 Josh Geary leads after day 2 at the Akarana Open