A pair of players who didn’t fare too well in their first visits to Berkeley Hall Club are atop the leaderboard at the halfway point of the 19th annual Players Amateur.

Florida’s Andy Zhang and New Zealander Daniel Hillier sit at 10-under-par after two rounds, giving them a one-shot advantage over Vanderbilt’s John Augenstein. First-round leader Luke Schniederjans and Bluffton native Bryson Nimmer are among a group tied for fourth at 7-under.

Zhang is teeing it up at the Players Am for the first time since 2013, when the event was played on the South Course. After tying for 69th at 12-over-par as a 15-year-old then, it’s safe to say he appreciates the venue change. The 20-year-old made nine birdies and one bogey en route to a 63 in Friday’s second round, vaulting into a share of the lead.

“I was hitting it a lot better than yesterday, controlling my approaches a little better and getting some more yardages that I liked,” Zhang said. “Overall, I played very well, and I putted very well.”

After starting with rounds of 77 and 75 a year ago, Hillier has opened with scores of 65 and 67. The 19-year-old Kiwi missed the cut last year, but something began to click during a 6-under 65 in the third round, and he has carried that comfort level into this year.

“I think I’m a lot more polished as a golfer,” Hillier said. “Last year was my first time coming to the states, and this was my first event so I didn’t really know what to expect. I think the familiarity helped out, because I’m 20 shots better than I was last year, so it’s obviously a vast improvement.”

Augenstein continued his solid play at Berkeley Hall, where he tied for fifth a year ago and has shot 69 or better in five of his six rounds over the past two years. He hit a rough patch with three straight bogeys to finish his front nine but rebounded with four birdies for a 31 on the back to get to 9-under for the week.

Nimmer endured a roller-coaster of a round, fighting his driver for much of the day, but was able to steady himself down the stretch to salvage a 1-under 70 and keep his name near the top of the leaderboard. The Clemson star started on the back nine and was 1-over on his first nine before a wild ride coming in. He made a bogey at the par-5 No. 2 when his approach was up against the lip of the greenside bunker, and his tee shot at the par-4 fifth found the water, leading to a double-bogey. A birdie at No. 6 and a long eagle putt at No. 7 redeemed the round.

“I think I’m in a good spot,” Nimmer said. “I didn’t have my best stuff today, and to be able to hang around and still have a chance is really important.”

The third round gets underway at 7:30 a.m. Saturday with the leaders scheduled to tee off at 9:40 a.m. Admission is free and the tournament is open to the public. 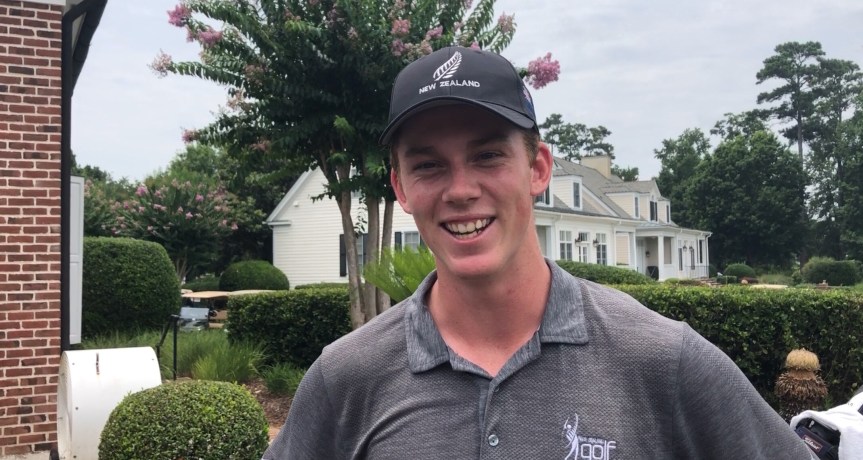