Rising young professional Daniel Hillier has added to his impressive Jennian Homes Charles Tour record which is growing at a rapid rate.

He’s won the DVS Pegasus Open by two shots to claim his third Jennian Homes Charles Tour event of his career; and his second this year to go alongside the Brian Green Property Group NZ Super 6’s title back in March.

Starting the day three shots back, Hillier knew he needed to come out of the gates quickly.

He opened with even par on his opening nine and was still a handful of shots back of the lead. That all changed on the 12th hole where he made back-to-back birdies.

He parred the 14th before making two more birdies at the 15th and 16th holes and all of a sudden, he was tied for the lead.

He made a clutch birdie up the last to take the clubhouse lead and have a nervous wait ahead of him.

Mako Thompson who was playing in the final group fell behind early in the day and was three over through his opening 10 holes.

He made a late charge at Hillier’s lead with birdies on the 12th, 15th, and 16th holes to get back to even-par for the day and 10-under for the tournament.

Thompson then unbelievable holed his second shot for eagle on the 17th to move within one shot of the lead with one hole to play.

However, Thompson made bogey and the tournament went to Hillier.

He says he couldn’t be happier.

“I was playing well early on today but hit a shot out of bounds on the seventh which set me back a bit and I thought it would be a tough ask to come back from that.

“I managed to get my way to the 12th without any more damage and something just clicked, and I birdied five out of the last seven holes. The rest is history,” Hillier says.

The Wellingtonian had no idea if his birdie at the last was going to be good enough and made sure he stayed in the zone after signing his scorecard.

“I didn’t know what was happening until I signed my scorecard and Dave [Mangan] came up to me and let me know that Geary has had some trouble but Mako has just gone birdie, eagle, to be one shot back heading up the last which through a spanner in the works.

“That made me head straight for the range to hit balls until I was told I had won,” he says.

Hillier says his game feels good ahead of the next two events on the Jennian Homes Charles Tour, starting with The Carrus Open next week.

“I’m feeling pretty good heading into the next few weeks. This event gives me a heap of confidence moving into those. I’ve been hitting it really well and been rolling it nicely all week this week, hopefully I can keep the form up and we’ll see how we go from there.” 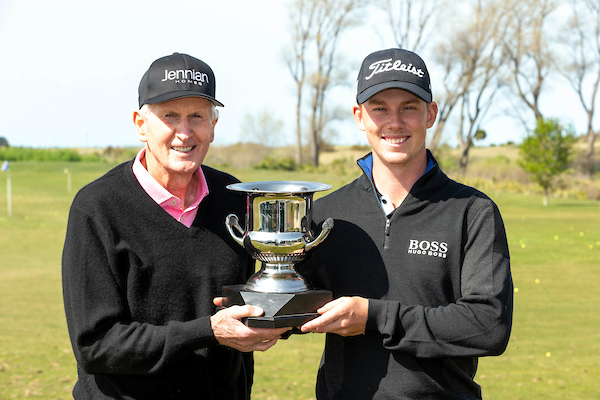 Rising young professional Daniel Hillier has added to his impressive Jennian Homes Charles Tour record which is growing at a rapid rate.