Daniel Hillier and Josh Geary lead by a shot at 10-under par after two rounds and will battle it out in tomorrow’s final group.

Hillier retained his lead with a round of three-under 69 after shooting a seven-under 65 yesterday. He’s looking to capture his second Jennian Homes Charles Tour title in three weeks, and the fourth of his young career.

He says he’s happy with his day.

“It was a much better day ball-striking wise today. I had a couple of lip outs and the putter was a little cold. I’m pretty happy overall and I’ve put myself in a good spot for tomorrow.”

Hillier says he’ll need his putter to heat up tomorrow in order to be a force, but he knows he is more than capable.

The tournament was reduced to 54-holes after the opening round was abandoned due to high winds.

“Being a three-round event, you can’t get away with a bad round. There isn’t as much time to get back into it. It’s interesting though, 54-holes is still a lot of golf and I have managed to have a couple of good one so far and I’m looking forward to the final sprint tomorrow.”

“It’d be really special. I had my first win when I was 17 years old and it took me until this year to get my second. To get three this year would be unbelievable and shows that I am heading in the right track.”

He fired a stellar six-under 66 following his four-under 68 yesterday to tie Hillier at the top with one round to go.

Geary has been knocking on the door of a victory over the last three weeks and is looking forward to the opportunity of another win tomorrow.

“If I play similar to today, I’ll go pretty close. I feel like I’ve played better this week, it seems a little more solid and I’ve hit the ball a lot better so that’s promising.

“The last two events I’ve been scoring well but not hitting it as well and I haven’t had enough in the tank to be dangerous late in the final rounds. Hopefully tomorrow will be different and I’ll be in with a chance,” Geary says.

Geary had a near flawless second round today, making seven birdies and just the lone bogey on his opening hole of the day.

He says it was a solid day at the office.

“It’s funny I had a shocking first hole and made a terrible bogey but played great the next nine holes and turned in four-under and it could have been a couple better.

“I drove it well and my wedge play was decent. I missed a couple of greens but managed to get up and down. I made a good birdie up the 15th and a good par on 16 after a poor tee shot where I had to play out backwards from the trees.

“I had a good shot at eagle up the last and that just shaved the edge. It was a really solid day today,” he says.

Although he is a five-time Jennian Homes Charles Tour winner, he’ll be heading into new territory tomorrow.

Geary has never won The Taranaki Open, which is something he’d love to change tomorrow.

Woonchul Na trails the pair by a single shot and will join them in the final group.

Momoka Kobori is the leading female and trails her brother Kazuma by three shots as he leads the amateur standings.

Play gets underway from 8.30 tomorrow morning. 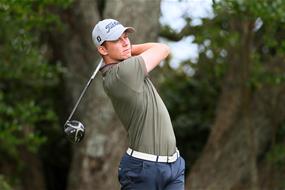