Hillier and Toomey take advantage at the Autex Muriwai Open

Hillier and Toomey take advantage at the Autex Muriwai Open

Daniel Hillier and Luke Toomey have taken advantage of the benign conditions at Muriwai Golf Links to take the early lead after the opening round.

Hillier and Toomey have both fired rounds of eight-under 64 to lead the tournament by one over last week’s champion Ryan Fox and Golf New Zealand National Academy member, Mako Thompson.

Hillier is playing his first event back on New Zealand soil after a long stint over the ditch playing on the PGA of Australasia, and rust following his 14-day isolation didn’t appear to play a factor.

He got underway first thing this morning and began his day on the 10th hole with a bogey before bouncing right back at the 11th with a birdie. He then made an eagle at the 14th followed by another birdie at the 17th and would make the turn at four-under.

The course record was in danger for much of the back nine after Hillier made birdies at the second, fourth, fifth, and an eagle at the sixth to get to eight-under and only need one more birdie to tie, and two more to beat the course-record of nine-under.

He says it was a solid day at the office after a couple of weeks of no golf.

“It was really fun out there today with Foxy and Jimmy who were playing some really good golf as well. We were feeding off each other really nicely as well.

“I got off to a slow start with a bogey on the first [hole 10] and then managed to get into a bit of a rhythm and made a few birdies coming home.

“I knew the course record was nine-under and I had a couple of really good chances coming in but unfortunately I couldn’t get the outs to drop but I’m always happy with eight-under and I had a good time out there,” he explains.

Meanwhile Toomey equalled the lead late in the day with a blemish free round and get his tournament off to the perfect start.

The Autex Muriwai Open is also playing host to the final stage of PGA Tour of Australasia’s Q-School which Toomey has entered.

Teeing off the first, he opened with four pars in a row before getting off the mark at the fifth with a birdie, followed by another at the sixth. He’d make one more at the eighth to make the turn at three-under par.

Toomey began the back nine with three birdies on the trot to get to six-under and all of a sudden be in a great position of breaking the course-record this afternoon.

He made another birdie at the 14th to get to seven-under and need two more to equal. He made one final birdie at the 18th to tie the lead and be in a great position of improving his status on the PGA Tour of Australasia.

Toomey says it’s nice to get off to a fast start.

“I’ve been getting off to slow starts lately in these events and I’ve been trying to play catch up. It’s finally nice to hit the ground running and be in contention right from the start.

“Ball-striking was nice today. I think I hit all 18 greens today and I gave myself a lot of looks at birdies and had a couple of nice two-putts for birdies as well as a nice 20 footer on the last.

“I still feel like there is a lot of room for improvement on the greens. I’m prepared for the fact that I’m not going to hit 72 greens this week and not every par 5 in two and at some stage I’m going to have to start rolling in some 10 footers,” he explains.

Two cards for the PGA Tour of Australasia are on offer this week, with Luke Brown currently occupying the final spot.

Play gets underway tomorrow morning at 7.15. 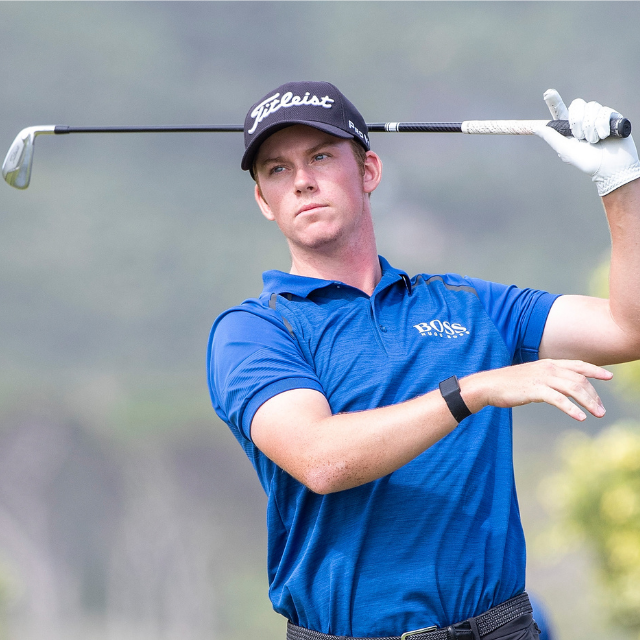 Daniel Hillier and Luke Toomey have taken advantage of the benign conditions at Muriwai Golf Links to take the early lead after the opening round.