New Zealand will carry a three-shot lead into the final day of the World Amateur Team Championships in Ireland as the trio of Denzel Ieremia, Daniel Hillier and Kerry Mountcastle close in on the country’s second ever Eisenhower Trophy success.

The team combined for a third round total of 10-under on the Montgomery Course on Friday (Saturday NZT), moving them to 30-under for the tournament. They lead Thailand, USA and Spain by three shots, while Italy and Demark are four shots behind the Kiwis.

Ieremia was the star performer, finishing with a clinical round of seven-under par to also take a share of the lead at 16-under in the individual standings after his second consecutive bogey-free round.

“I do like Monty. I think the course sets up good for me. I basically played the same as I have all week, just solid and stayed patient, hit a few good shots and holed some putts,” Ieremia said.

“I am very excited. We are in a good position heading into tomorrow and it’s just a testament to the way all the guys have prepared and how we’ve planned our way around these two golf courses.”

The team is one step closer to emulating the feats of Michael Campbell, Phil Tataurangi, Grant Moorheard and Stephen Scahill who famously won the Eisenhower Trophy for the first time back in 1992.

“That would be really cool. I’ve played team golf in college and I’ve always thought winning a team event is way more thrilling than winning an individual event. So to have the opportunity to go and convert tomorrow is great and we have got a good group of guys to do it.” 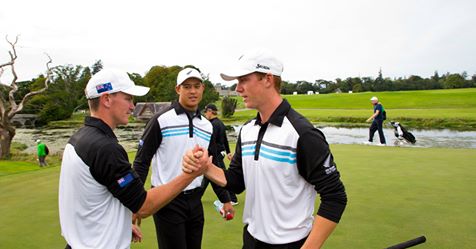 The New Zealand team after finishing Round 3 of the Eisenhower Trophy in Ireland.