An international field of 288 elite amateur golfers have descended on the North East of Scotland for the 123rd Amateur Championship at Royal Aberdeen and Murcar Links for the first time.

Golfers from 38 countries across Europe, Asia-Pacific, Africa and the Americas will tee off overnight in a bid to become the 2018 Amateur Champion and secure a place in the field for The 147th Open at Carnoustie next month as well as a place in next year’s Masters Tournament, by tradition, and the US Open at Pebble Beach next year.

There is a strong trifecta of New Zealanders entered in the championship as Luke Brown, Daniel Hillier and Mark Hutson strive to make the first cut of 64 players plus ties to make the match play stages.

Brown who has returned to the UK for the third time, is excited about the test ahead at one of the world’s most prestigious amateur events. “It’s a special place to come back to and it’s always a challenge, so we’re very excited,” said Brown. “It lets you use your imagination and you get to play so many shots here, but the main thing is that you have to stay patient.”

Both Brown and Hutson have had experience in links golf here in Scotland, but remarkably, this is the first time New Zealand Amateur champion Hillier has stepped foot on this side of the world.

“It’s a pretty amazing feeling being over here, it’s obviously my first time in Scotland and being at one of the more renowned event at Royal Aberdeen.”

Living in Wellington, the country’s number one amateur has had the benefit of playing at Paraparaumu Beach Golf Club throughout his career and hopes that will help his cause as he looks to make history at Royal Aberdeen.

Hutson who has also had success at the highest level in New Zealand after claiming the New Zealand Stroke Play Championship last year is looking forward to the occasion.

“It’s taken a long time to get here, but it’s awesome and I can’t wait for the week. It’s so different to what we get at home but for me, it’s all about getting off to a good start and putting two good numbers on the board,” said Hutson.

After competing in the St Andrews Links Trophy last week and missing the cut, the trio will be excited to bounce back, find their groove and be tested at the highest level at Royal Aberdeen.

Follow the Kiwis’ progress with live scoring available at randa.org throughout the championship. 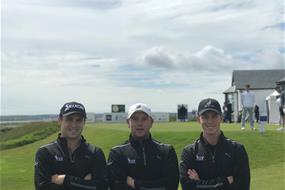 Luke Brown, Mark Hutson and Daniel Hillier are set to play the 123rd Amateur Championship at Royal Aberdeen and Murcar Links in Scotland.