Kiwis chance to play at The Open Championship and The Masters

Kiwis chance to play at The Open Championship and The Masters

A year on from hosting one of the world’s biggest amateur events here in New Zealand, the Asia-Pacific Amateur Championship is back and our Kiwi team has arrived in Singapore, ready to tee off tomorrow.

This is the 10th edition of the prestigious championship which is being played at Sentosa Golf Club, Singapore from 4-7 October.

The six-man team of Daniel Hillier, Denzel Ieremia, Luke Brown, Kerry Mountcastle, Charlie Hillier and Matthew Mclean may have left a vacancy in the Harewood Open field for this week, but they are in position to earn the special invitation to play in the 148th Open Championship at Royal Portrush and The Masters Tournament at Augusta next year.

They will come up against a full field of 120 players from 40 countries who will vie for what has often been described as the ‘ultimate prize’.
After the recent success at the World Amateur Team Championships in Ireland, the Eisenhower Trophy Trio of Hiller, Ieremia and Mountcastle will be more confident as they look to make history this week.

These three all have experience at this championship with Hillier playing for the third time while Ieremia and Mountcastle will look to build on their Wellington debuts.

Brown and Hillier (Charlie) will also be more comfortable in the surroundings and will be looking to feature late on the final day which leaves Mclean as the only debutant this year.

The Canterbury representative was unlucky not to be playing in this event held at the Royal Wellington Golf Club last year, but now gets his chance to wear the fern on one of the biggest stages while his friends and family follow with interest from the Harewood Open.

Sky Sport will have live coverage of proceedings from 8:30pm, Thursday on Sky Sport 3. 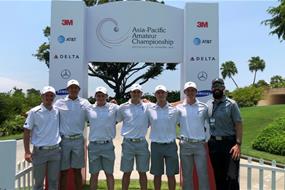 The New Zealand players at the 2018 Asia-Pacific Amateur Championship.