Daniel Hillier, of New Zealand, shot 4-under-par 67 at Pebble Beach Golf Links, a round highlighted by an eagle 3 on the 14th hole, for the best score of the day on Monday in the first round of stroke play of the 118th U.S. Amateur Championship.

Hillier, 19, a two-time New Zealand Amateur champion, made five birdies and holed a 110-yard shot for eagle on the 581-yard, par-5 14th hole. His 67 was one stroke better than two players, Trevor Phillips, of Inman, S.C., and Isaiah Salinda, of South San Francisco, Calif.

Phillips, 20, who is entering his junior year at the University of Georgia, made six birdies in carding the day’s best score on stroke-play co-host Spyglass Hill Golf Course. Salinda, 21, a senior at Stanford University, also made one of the day’s eagles, with his coming on the par-5 sixth hole at Pebble Beach, where he hit a 6-iron second shot to 25 feet and made the putt.

“It was a pretty nerve-racking start, obviously being my first U.S. Amateur and being at Pebble Beach,” said Hillier, who is No. 27 in the World Amateur Golf Ranking and will compete for New Zealand in next month’s World Amateur Team Championship in Ireland. “But my caddie is a good friend of mine and we kept everything nice and relaxed, and I managed to put a good score up on the board. It’s a pretty awesome feeling.”

Salinda, 21, who won the Pacific Coast Amateur at The Olympic Club on July 27, was playing Pebble Beach for just the second time, counting his U.S. Amateur practice round.

“I felt like I was prepared and knew the course well enough,” said Salinda, who is competing in his first USGA championship. “I’m sure I’ll learn it more as the week goes on.”

Cole Hammer, 18, of Houston, Texas, an incoming freshman at the University of Texas who teamed with Garrett Barber in May to win the U.S. Amateur Four-Ball, was one of two players to shoot 2-under 69 at Pebble Beach. Hammer, who recently won the Western Amateur, played in a group with Salinda. Hammer was joined at that score by William Gordon, 22, of Davidson, N.C., who is entering his senior year at Vanderbilt University.

Michael Thorbjornsen, of Wellesley, Mass., and Akshay Bhatia, of Wake Forest, N.C., 16-year-olds who squared off in the U.S. Junior Amateur final three weeks ago, a match won by Thorbjornsen, were both among 14 players who shot 70 – six of them at Spyglass Hill (par 72) and eight at Pebble Beach (par 71).

A total of 312 players will switch courses on Tuesday. Following the second round, the low 64 scorers advance to the match-play bracket, which starts on Wednesday morning, exclusively on Pebble Beach. TV coverage begins on Wednesday with the Round of 64 on FS1 from 5-8 p.m. EDT. 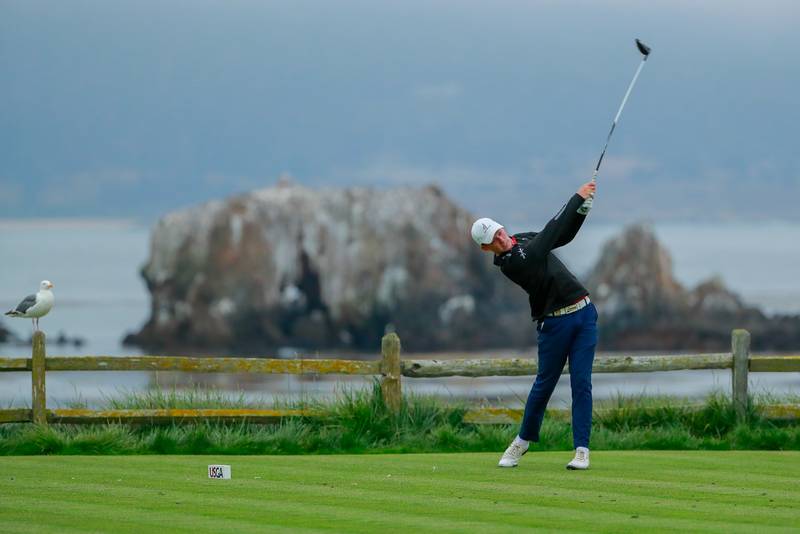 Daniel Hillier hits his tee shot on the 18th hole during the first round of stroke play at the 2018 U.S. Amateur at Pebble Beach .