NZ golfer looking to renew acquaintances with ‘The Big Easy’

NZ golfer looking to renew acquaintances with ‘The Big Easy’

Fledgling New Zealand professional Daniel Hillier is hoping to link up with a four-time major golf champion ahead of next week’s British Open.

Hillier, the world no. 668, is heading to Royal St George’s next week to play in his second major after he won one of the final four qualifying tournaments last month.

He is hoping his manager can pull some strings before the Open.

“Luckily for me being in the same management group as Ernie Els, my manager is trying to sort me a practice round with Ernie,” Hillier said.

The South African, nicknamed The Big Easy, won the British Open in 2002 and 2012 after also winning the U.S. Open twice.

“I played a practice round with Ernie in 2019 when I played the U.S. Open. That was the first time I met him.

“He’s such an open guy and really down to earth. Unless you knew what he had accomplished you wouldn’t know. He’s just a real genuine guy and it was really good to spend some time with him.

“So hopefully I can spend a bit more time with him and be able to pick his brains even more.”

Hillier has also reached out to New Zealand no.1 Ryan Fox, who will play his fifth British Open next week.

“I’ve been in touch with Foxy, which is pretty cool. He said congrats on getting in so I’ll probably try and hook up a practice round with him.

“They’ll be two good guys to get around with. I’m sure they’ve played St George’s a few times before so I’ll be able to pick their brains.”

The Wellingtonian missed the cut at the 2019 U.S. Open when he was still an amateur.

“The first [major] appearance I made there at Pebble Beach was unbelievable and I’ll never forget it but I think I got quite caught up in the whole atmosphere, playing with the likes of Tiger Woods and Rory McIlroy and all the big names I’m constantly seeing on TV and sort of idolised growing up.

“Now that I’ve been through that I sort of know what to expect and I feel like I’m a lot more prepared this time around to actually go in and give it a good crack and hopefully if all of the pieces fall together at the right time I’ll see my name near the top of the leaderboard.

“I feel like my golf has improved over the last couple of years to a standard where I can compete.”

Hillier turned professional in late 2019 but Covid-19 put his career on hold for a year.

He has climbed more than 150 places in the world rankings since May when he left New Zealand to play on the European Challenge Tour.

“I’ve had a pretty good couple of months over here, played some consistent golf and hopefully I can continue that.”

He is 42nd on the Challenge Tour standings and has a couple of invites to tournaments after the British Open.

“If I have a couple of good finishes in those events then I can hang around for the rest of the season and hopefully play a pretty full schedule so that’s sort of the plan.

“If I manage to finish in the top 20 on the challenge tour standings that’ll grant me a European Tour card for the following year so I’ve got my sights set on that.

“A good week at the Open will definitely help.” 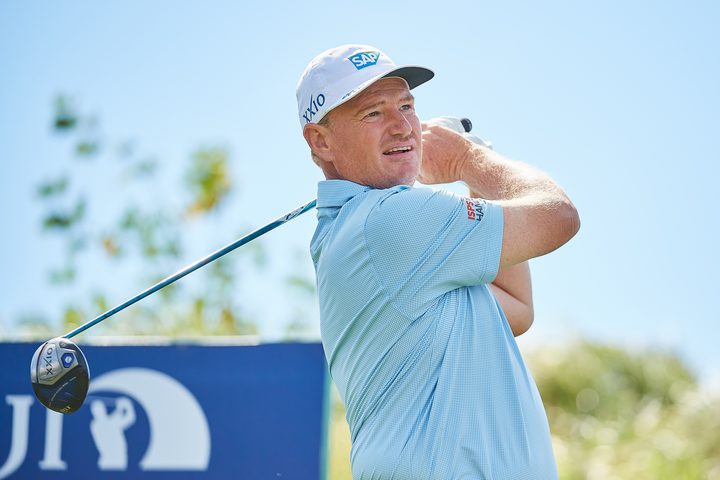 Ernie Els in action at the 2018 Fiji International. Photo: PGA of Australia.