Fresh from the Asia-Pacific amateur, Daniel Hillier and Mark Hutson will meet in the NZ amateur quarterfinals on Saturday.

New Zealand’s No 2-ranked golfer Daniel Hillier scraped through his last-16 match on the 19th hole against Canterbury’s Dominic Brettkelly who put in a mammoth Friday effort before a home crowd.

Brettkelly earlier went to the 23rd hole to beat another Canterbury player Scott Manyweathers in the round of 32 and looked to be in control against Hillier, one-up heading down the 18th at Russley.

Hillier,New Zealand’s top finisher at the Asia-Pacific Amateur Championship on Sunday, finished strongly to end Brettkelly’s run, and will face another AAC competitor Mark Hutson in the quarterfinals on Saturday. Hutson beat Ryan Chisnall, the country’s third-ranked player, one-up in a heavyweight clash in the round of 16.

The youngest NZ amateur winner at age 17 in 2015, Hillier could still face defending champion Louis Dobbelaar of Australia who lurks on the other side of the draw after beating national under-19 champion Mako Thompson of Hawke’s Bay, 3 and 2.

Top qualifier Scott Hellier, the Southlander who shot a course record 60 on Thursday, bowed out in the first round to Canterbury youngster Tom Parker who was 32nd and final qualifier. Parker beat Hellier on the 19th, then beat James Hydes 4 and 3 to set up a quarterfinal against another local Oscar Cadenhead.

“It’s been pretty crazy, obviously I know my way round here pretty well as I have played here all my life, but that’s match-play for you. It’s just all about what happens on the day,” said Parker. 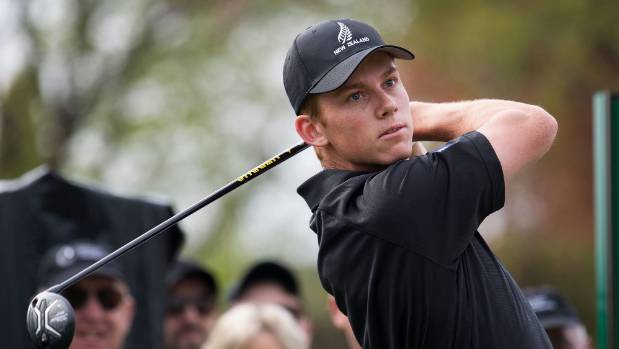 Fresh from the Asia-Pacific amateur, Daniel Hillier and Mark Hutson will meet in the NZ amateur quarterfinals on Saturday.