Takumi Kanaya punched the air in delight, before his countrymen surrounded the 20-year-old and showered him with their water bottles.

The Japanese amateur lapped it up, celebrating his triumph in the Asia-Pacific Amateur Championship, which comes with invites to next year’s Masters at Augusta National, and 148th Open Championship at Royal Portrush.

Kanaya, who went into the final round of the Singapore tournament two shots off the pace, fired a final round five-under 65 to get home by two strokes at the Sentosa Golf Club on Sunday.

“When I was a kid I dreamed of going to the Masters. This is a dream come true,” he said through a translator.

“I wasn’t expecting to play the Masters, and The Open, so early in my career. Looking forward to it, absolutely.”

After shooting rounds of 69, 69  and 64 the first three days, Kanaya carded seven birdies and two bogeys on the final day to finish 13-under the card.

India’s Rayhan Thomas and Japan’s Keita Nakajima were tied for second, enough to secure invites to The Open qualifying series.

Defending champion Yuxin Lin (China) had a forgettable day, having gone into the fourth round with a one-shot lead on the back of a scorching third round.

He was sunk by six bogeys in his ugly final round 75, which relegated him to share of ninth.

Daniel Hillier was the pick of the six New Zealanders in the field, finishing in a share of 13th after his final round 68.

On the back of his 72, 65 and 71 the first three days, the Wellingtonian was four-under the card when his third tilt at the APAC was said and done.

As was the case the first three days, he put together a string of birdies but could not keep the hammer down in the energy-sapping heat.

“I struggled to keep the momentum going in a couple of the rounds, and that was really the difference in the end. I could have been right up there if I had managed to keep trucking along. But that’s golf. I’ll come back stronger next time and hopefully it will be a different scenario.”

Hillier shot six birdies and four bogeys on Sunday, including one on the 207m par-three seventh, which he bogeyed each day.

“I was saying to myself, ‘they should make this a par four’. It was my bogey hole, for sure. Just stuff like that. It’s stuff you don’t really want to happen but it does from time to time and you’ve just got to learn from it.”

Hillier plans to take a three-week break before his next tournament, the New Zealand Amateur Championship, starting on October 31 in Wairakei.

He’s also got an invite to November’s Australian Open, where temperatures are sure to be down from the muggy heat he battled in Singapore.

“Yeah, it was still challenging out there,” Hillier said when asked if it got any easier through the four days.

“But my sister [caddie] and I managed it a lot better than we did round one. And that showed, especially in round two, when I was able to finish well there.

“It’s definitely a factor, and to see how the other guys handled it was pretty impressive. They’re all pretty well adjusted in this heat. I think it’s something I need to learn to do.”

Charlie Hillier (no relation) was the next best Kiwi, finishing a shot back in a share of 16th, while Denzel Ieremia (one-under) finished tied for 21st. 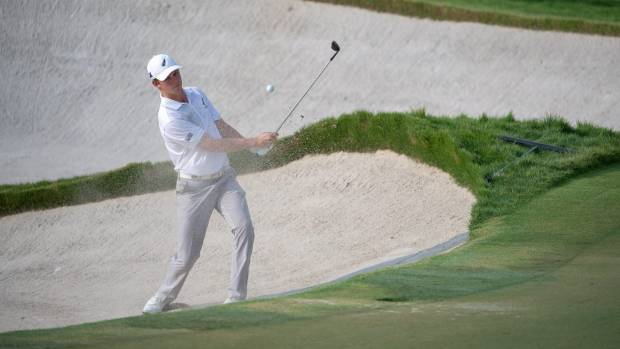 Daniel Hillier was the pick of the Kiwis and Aussies at this year’s Asia-Pacific Amateur Championship in Singapore.