The number of young people nominated for this year’s Porirua City Sports Awards has made the judges’ task that much more difficult.

The annual awards highlight and celebrate Porirua sportspeople for their achievements over the past year, and will be no mean feat to choose the category winners.

This year, the Young Sportsman section had nine nominations, by far the most across the awards, in sports ranging from bowls to boxing, barefoot waterskiing to canoe sprint.

Narrowing it down to three nominees for the awards night on 8 November did not prove easy, judge and Black Sox coach Mark Sorenson said.
“Overall, the calibre across all the categories was very good and it’s fantastic to read about all the achievements happening out there,” said Sorenson, who took out last year’s Coach and Premier award winner said.

“I was really happy to see so many nominations in the young sportsman category – it bodes well for young people and sport in Porirua, in so many varied disciplines too.”

In the Individual Sportsman category, downhill mountainbiker Bryn Dickerson, who had a superb season in Europe, faces stiff challenge from champion golfer Daniel Hillier and All Black TJ Perenara.

Past Individual Sportswoman winner Marama Elkington, who is at the top of her game in waka ama, will battle it out against swimmer Bronagh Ryan and triple jumper Anna Thomson in the category this year.

Toni Tawahi (basketball), Logan O’Connor (basketball/swimming) and Elizabeth Brothwood-McKee (ten pin bowling) will vie for the Disabled Sportsperson category, which is in its third year now, while the team section will be hotly contested – Mana Kayak Racing Club’s U18 women’s team, Northern United Rugby Club’s women’s side and Titahi Bay Surf Life Saving Club’s nationals team are up for the gong.

Coach of the year comes down to Matt Poutoa (Norths’ women), Rachel Wybourne-Curtin (bowls) and Latu Talu (boxing), and the Volunteer award will be won by either Greg Adlam (canoe sprint) or Tony Vincent (football).

Willie Taurima was the only nominee in the Service to Sport category, so will be recognised for his many years of service to basketball.

The final award on the night will be the Michael Campbell Supreme Award, given to one of the category winners. 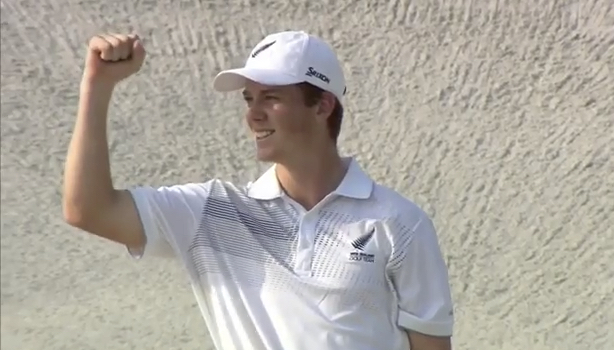 Daniel Hillier holes out from the bunker on the 18th hole during round 2 of the Asia Pacific Amateur Championship in Singapore, October 2018.